From April 12th to May 27th the Center for the Humanities and Social Change (HSCVenice) will release an important series of dialogues marking the third edition of Afropean Bridges.

Dialogues will be available twice a week (Monday and Thursday at 6.00 p.m. CET) according to the calendar below, and will remain available on HSC-Venice Youtube Channel and on the Afropean Bridges website and Facebook page. Unless otherwise stated, dialogues are in English.

Dunja Mijatović is Commissioner for Human Rights of the Council of Europe. Her office has recently released a report on Combating racism and racial discrimination against people of African descent in Europe.
Vittorio Longhi is a journalist and author, and one of the organisers of Afropean Bridges. His latest book is Il colore del nome, Solferinolibri 2021

Bernardine Evaristo was born in London in 1959 to an English mother and Nigerian father. She is the author of eight novels, and plays and criticism. Girl, Woman, Other (Ragazza, donna, altro, Sur 2020) won the Man Booker Prize and the British Book Award, and was finalist for the Orwell Prize for political literature and the Women’s Prize for Fiction.
Maaza Mengiste  is a novelist and essayist. She is the author of the novel, The Shadow King (Il Re ombra, Einaudi 2021) which was shortlisted for the 2020 Booker Prize, and was a 2020 LA Times Book Prize Fiction finalist. Her debut novel, Beneath the Lion’s Gaze (Lo sguardo del leone, Neri Pozza 2018), was selected by The Guardian as one of the 10 best contemporary African books.

Giselle Musabimana works as Communication Officer for UNIAFRICA, Union for the development of Italian and African Relations
Alex Nkosi is a policy analyst working with ITUC-Africa. He coordinates the Africa Trade Union Development Network.

Sulaiman Addonia is an Eritrean author. He spent his early life in a refugee camp in Sudan. He lived in Saudi Arabia and studied at the University College London. He is the founder of the Asmara-Addis Literary Festival in Exile.  He wrote The consequences of love (2009, Le conseguenze dell’amore, Sperling & Kupfer, 2009) and Silence is my mother tongue (The Indigo Press, 2018).
Cristina Ali Farah is an Italian writer of Somali and Italian origin. Author of Madre piccola, Frassinelli 2007  (A Little Mother), and Il comandante del fiume (66th & 2nd, 2014)

Lidija Kostic Khachatourian is an art gallerist and curator based in Dubai and Venice
Kelechi Nwaneri is a Nigerian artist born in 1994 who was in Venice in 202o as an artist in residence at AKKA project.


7.00 P.M. VITTORIO LONGHI & CHINEDU NWOKEAFOR
Chinedu Nwokeafor is an activist for the Black Lives Matter movement in the United States.

(in Portuguese with Italian subtitles)
Francesco Vacchiano is professor of Health Anthropology and African Languages and Cultures at Ca’ Foscari University of Venice.
Mamadou Ba is a sociologist. Born in Senegal, he has been living in Portugal for over twenty years, where he is an anti-racist activist and campaigner, dedicated to the struggles for the human rights of racialised and migrant people.

(in Italian)
Igiaba Scego, former fellow of HSC Venice, is a writer, journalist and activist. Her latest book is La linea del colore (Bompiani, 2020)
Saba Anglana is a Somali-Italian singer, songwriter and actress, also author and host of radio programs.
Esther Elisha is an Italian actress with an Italian mother and a Beninese father. She played various roles in cinema, theatre and television

(In Italian)
Vittorio Longhi is a journalist and author, and one of the organisers of Afropean Bridges. His latest book is Il colore del nome, Solferinolibri 2021
Francesca Melandri is an Italian novelist, screenwriter, and documentary filmmaker. Her latest novel is Sangue giusto (Rizzoli 2019).

(In French with Italian subtitles)
Chiara Piaggio
Sami Tchak is a Togolese writer, Winner in 2004 of the Grand prix de littérature d’Afrique noire not for a single title but for his work as a whole.

Alessandra Di Maio teaches English literature at the University of Palermo. She works on postcolonial, migration, transnational and diaspora studies, with a special focus on Africa.
E.C. Osondu is a Nigerian writer who is a winner of the Caine Prize and a Pushcart Prize. He is the author of a novel, This House is Not For Sale, and of a short story collection, Voice of America.  Quando il cielo vuole spuntano le stelle was published in Italy in 2020 He is an Associate Professor of English at Providence College in Rhode Island

Johny Pitts is is the curator of the ENAR (European NetworkAgainst Racism) award-winning online journal Afropean.com and the author of Afropean: Notes From Black Europe (Penguin Random House, published in Italian as Afropei, EDT, 2020)
Shaul Bassi is the Director of the Center for the Humanities and Social Change and professor of English Literature at Ca’ Foscari University. 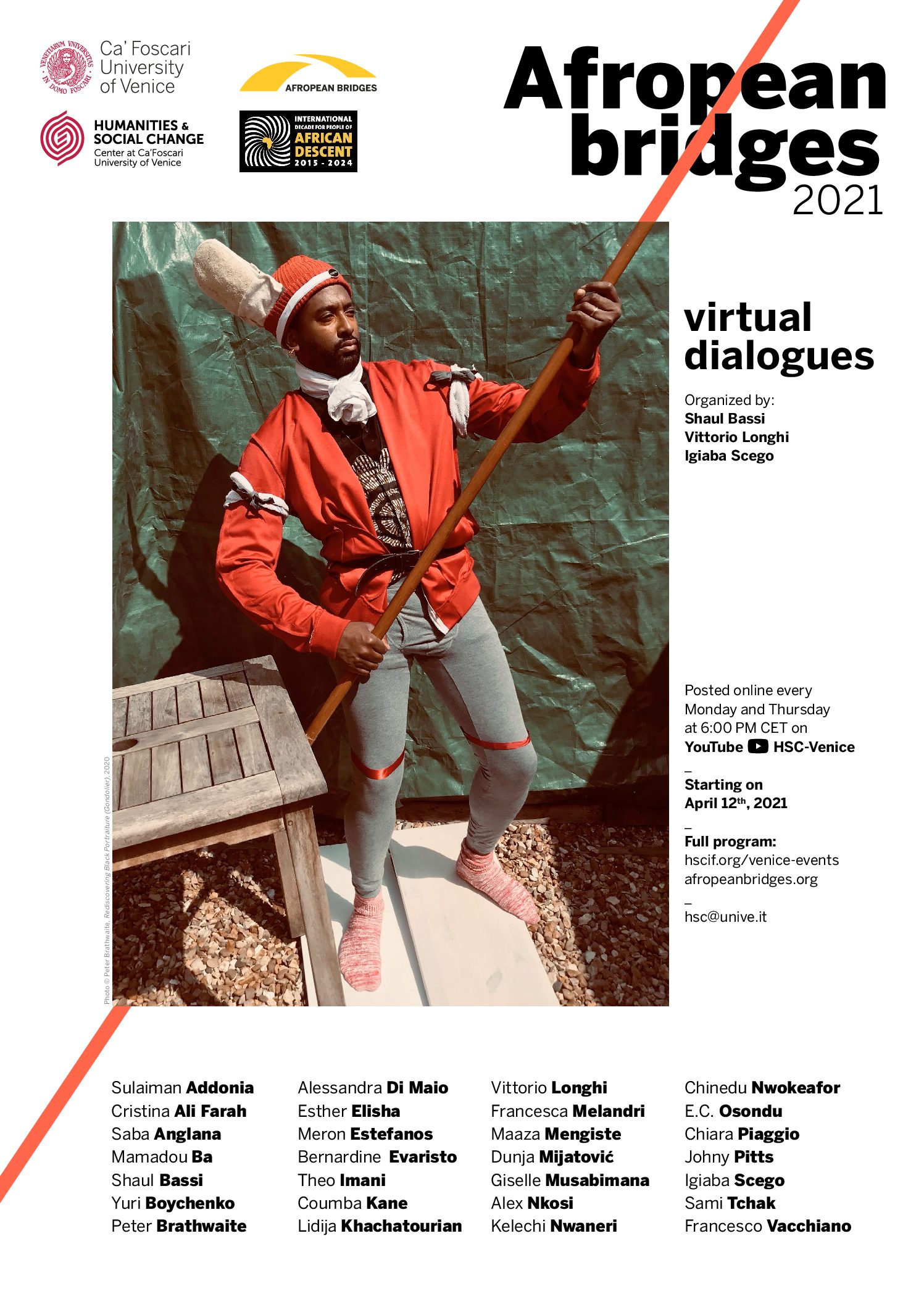 IN SUPPORT OF THE UNITED NATIONS

We use cookies to ensure that we give you the best experience on our website. If you continue without changing your settings, we'll assume that you are happy to receive all cookies on the Afropean Bridges website. Thank you. Ok